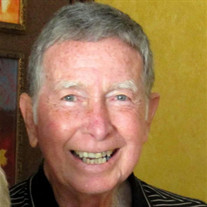 Hugh Meldon McWilliams, 85, of Byram passed away peacefully on Wednesday, November 27, 2019. Funeral arrangements will be held at 11 a.m. Monday, December 2, at Chancellor Funeral Home in Byram with burial at 3 p.m. at Bethlehem Methodist Church outside Winona, MS. Visitation will be held at the funeral home Sunday, December 1, from 4 p.m. to 6 p.m., and preceding the service on Monday at 10 a.m. Hugh was born April 9, 1934, in Winona, MS, to the late Carl McWilliams and Mattie Irene Patterson McWilliams. He was a 1952 graduate of Kilmichael High School and a 1956 graduate of Mississippi State University, where he received a B.S. degree in agriculture, and in 1961, a Masters of Science in Agronomy. Hugh grew up living and loving the farm life, working with his parents, brother, and sisters on the family farm in Montgomery County. He was a member of the Montgomery County 4-H Club raising hogs and cows for competition. Hugh served in the United States Army at Fort Carson in Colorado Springs, CO, from 1956 until 1958 completing his service as a Specialist, Fourth Class. He began his vocational career at the University of Arkansas, Stuttgart, from 1961 until 1965, as a researcher at the Rice Branch Experiment Station and University of Arkansas, Fayetteville. From 1965 until 1994 he worked for the U.S. Department of Agriculture for the Statistical Reporting Service working in Little Rock, AR, Washington D.C. for seven years, and back to his home state of Mississippi in 1975. Hugh, and his wife, Reba, made many special and long-lasting friendships during his career with the USDA. Hugh met his beloved wife of 56 years, the late Reba Lochridge McWilliams, on a blind date while she was at Mississippi State College for Women and he was a MSU student. They were married in 1960 and during the course of their marriage were blessed with two children. He was a loving and encouraging father. Throughout their marriage Hugh was a devoted and loving husband, culminating toward the end of their marriage when Reba suffered the affects of Non-Hodgkins Lymphoma. His love for farming and the outdoors continued throughout his life. Tilling and planting a large garden each spring was a family activity and he was proud of the harvest sharing with neighbors and friends. He always said Spring was his favorite time of year. Hugh loved the Lord Jesus having accepted Him as his Savior at an early age. He served in various capacities in churches including deacon and assisting Reba in Sunday School activities. He was a long-time member of Woodville Heights Baptist Church and at the time of his death, a member of Wynndale Baptist Church in Byram. There he and Reba enjoyed spending time with friends and active in the “Wynndale Winners” senior adult group. Hugh is survived by two children, Tim (Beth) McWilliams and Holly McWilliams of Madison; two grandchildren, Hannah (Justin) Lewis of Madison and Zachary McWilliams of Memphis, TN; and two great grandchildren, Katherine Lewis and Hugh Jeffrey Lewis. He is also survived by a sister Margaret Cullen of Atlanta, GA; a brother, Joe (Ruth) McWilliams of Winchester, NY, and a host of family and friends. Two sisters preceded him, the late Elizabeth Bradshaw and Virginia Faulk. The family would like to thank the caregivers at The Blake in Ridgeland and Hospice Ministries in Ridgeland for their compassionate care. Also, the family is grateful for Mr. McWilliams’ caring sitters, LaQunda Collins, Kennethra Guidry, and Audrey Jackson with Southern Homecare. The family requests that in lieu of flowers charitable donations are to be made to The Baptist Children’s Village, P.O. Box 27, Clinton, MS 39060 and Gateway Rescue Mission, 328 S. Gallatin Street, Jackson, MS 39203.

The family of Mr. Hugh Meldon McWilliams created this Life Tributes page to make it easy to share your memories.

Hugh Meldon McWilliams, 85, of Byram passed away peacefully on...