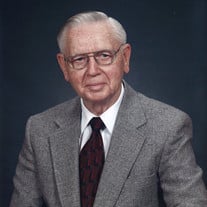 James Louis Powell left his earthly home on September 3, 2018. Visitation will be held Tuesday, September 4, 2018 from 5-7 PM at Chancellor Funeral Home in Byram and again on Wednesday, September 5, 2018 from 10-11 AM at Holy Savior Catholic Church in Clinton, followed by his funeral service. Interment will be at Cedar Lawn Cemetery in Jackson. Mr. Powell was born to Hiram J. Sr. and Daisy Powell; he was the youngest of four children. He attended St. Joseph school and joined the Navy during WWII at 17 years old. He served on the USS Lexington and when he was asked if he ever thought those days, he said “Everyday I draw a breath”. Upon returning to Jackson after his service time, his brother and his fiancé’ picked him up at the train station with her roommate Ellie Dee Papizan who later became the love of his life. After marrying her they had 3 children. Retiring after 35 years from the MS Air National Guard, he spent many years working at St. Mary’s Catholic Church restoring the pews and kneelers to their former beauty, then later became an active member of the Holy Savior Catholic Church in Clinton, MS. He is preceded in death by his wife, Ellie Dee Papizan, daughter Paula Ann Powell, brothers; Elton Powell and Hiram Powell, sister; Dorothy Weisenberger, and parents Hiram Josiah Sr., and Daisy Crane Powell. He is survived by his sons; Mike (Peggy) Powell of Ocean Springs, Keith (Pam) Powell of Edwards, grandchildren; Amy (Matt) Elder of Ocean Springs, Jerimy (Shelly) Powell of Brandon, Matthew (Melissa) Powell of Bolton and Blake (Lindsay) Powell of Brandon, great grandchildren; Sam and Daniel Elder, Katie and Bradley Powell, Cole Pierce, Cooper and Emma Powell, Maddox and Avi Reese Powell, and best friend; Harold Robinson.

James Louis Powell left his earthly home on September 3, 2018. Visitation will be held Tuesday, September 4, 2018 from 5-7 PM at Chancellor Funeral Home in Byram and again on Wednesday, September 5, 2018 from 10-11 AM at Holy Savior Catholic... View Obituary & Service Information

The family of Mr. James Louis Powell created this Life Tributes page to make it easy to share your memories.