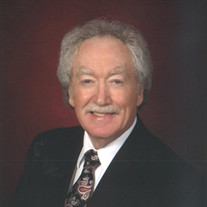 Don Bartlett died peacefully at Hospice Ministries in Ridgeland on Tuesday, September 14, 2021 and is now with his Lord and Savior, Jesus Christ. The family is thankful for the kindness and compassion shown to him by the staff of hospice. Visitation will be held on Thursday, September 16, 2021 from 4:00 to 6:00 p.m. at Chancellor Funeral Home in Byram, MS. Graveside services will be held on Friday, September 17 at 11:00 a.m. at the Magnolia Cemetery in Magnolia, MS. Don was born to David and Eunice Bartlett on March 20, 1940 in Bermuda, AL. His family moved to Mobile, AL where he graduated from Murphy High School. Don enlisted in the Navy after graduation and served as a Navy Petty Officer, communications specialist, and top-secret cryptographer in California, the Pacific Theater aboard the USS Alamo, and in Taipei, Taiwan. He moved to Mississippi in 1968 where he began a career in law enforcement with the Jackson Police Department for 22 years. He worked through the ranks of patrolman to Chief of Detectives. While at the JPD, he worked his way through college, finishing with a Master’s Degree in Criminal Justice from Jackson State University. He served as an adjunct professor at Hinds Junior College and Jackson State University and taught criminal justice courses. He began a second career with the Mississippi Attorney General’s Office as an investigator and later as Deputy Director of Investigations. He also was a Certified Firearms Instructor with the NRA. Don was a Shriner and 33 degree Scottish Rite Master Craftsman. He was a graduate of the FBI National Academy and Southern Police Institute. Don received the Lifetime Achievement Award at the Prosecutors Conference along with many other awards including Officer of the Year at JPD. Don was preceded in death by his parents. He is survived by his beloved wife of 41 years, Diane; daughter, Teri Lynn Lenard of Kingwood, TX; son, Donald Maurice Bartlett (Heather) of Hustle, VA; son, Justin Kuykendall (Shannon) of Flowood, MS; and son, Darren Kuykendall (Aimee) of Hernando, MS. He is also survived by his brother, Terry Bartlett (Angela) of Elberta, AL; sister, Montez Pelfrey of Sparks, NV; sister, Jean Etheridge (Gerald) of Austell, GA; sister, Dianne Marshall (Allen) of Mobile, AL; and sister, Elaine Knowles (Ralph) of Van Cleave, MS. He is also survived by grandchildren, Daniel Lenard (Melody), David Lenard (Sydney), Breckyn Kuykendall, Cooper Kuykendall and two great-grandchildren, along with nieces and nephews. Also his much loved dogs, Macy and Jake. Don wrote on April 27, 1996, he wanted to be remembered as a Christian, Husband, Father, Soldier, Policeman, and Teacher. He loved playing his guitar and singing. In lieu of flowers, the family requests that memorials be made to the Shriners Hospital for Children, 100 Samford Ave., Shreveport, LA 71103 or the charity of your choice.

Don Bartlett died peacefully at Hospice Ministries in Ridgeland on Tuesday, September 14, 2021 and is now with his Lord and Savior, Jesus Christ. The family is thankful for the kindness and compassion shown to him by the staff of hospice. Visitation... View Obituary & Service Information

The family of Mr. David Donald Bartlett created this Life Tributes page to make it easy to share your memories.