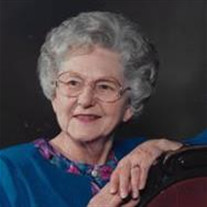 Helen Marie Neyman Johnson, 90, died Tuesday, February 26, 2019 at Hospice Ministries in Ridgeland, MS. Visitation will be Friday, March 1from 9:30 am – 10:30 am at Hillcrest Baptist Church in Byram followed by a Celebration of Life service beginning at 10:30 am. Rev. Chris Goolsby and Dr. John Taylor will officiate the services. Burial will follow at Lakewood South Cemetery in Jackson. She was a longtime resident of Jackson, living at Brookdale Assisted Living in Clinton for the last 4 years. A Texas native, Helen was born in Mineola, Texas on March 28, 1928. She graduated as salutatorian from Mineola High School and later attended Panola Junior College in Carthage, Texas. On May 11, 1947, she married Wallice W. Johnson in Longview, TX. In their early years of marriage, they lived in Mineola, TX where she worked as a secretary in a law firm. In 1955 they moved to Carthage, TX where she worked in an insurance agency. They moved to Jackson in 1966 and transferred to Houston, TX in 1981. During that time she worked for Fox Everett Insurance Company in both the Jackson, MS and Houston, TX offices retiring in 1986. After her retirement, they moved back to Jackson to be near their two daughters. She and her husband enjoyed traveling; visiting all 50 states, Barbados, and several providences in Canada. She was an excellent seamstress often making matching Easter outfits for her daughters. After retirement she took several adult education art classes and enjoyed oil and watercolor painting. Helen was an excellent home cook and baker. She enjoyed canning fruits and vegetables from her husband’s garden, needlework and cross stitch. Being encouraged by her best friend, Bobbie Roberts, over a span of several years she was awarded 97 ribbons at the MS State Fair in the categories of Food Preservation and Arts and Crafts. She had a strong faith in Jesus Christ as her Lord and Savior. She was an active member of Central Baptist Church in Carthage, TX where she was a Girl’s Auxiliary leader. She was also a member of McDowell Road Baptist Church, Jackson and Spring Baptist Church in Houston, TX. Currently she was a member of Hillcrest Baptist Church in Byram. Helen is preceded in death by her husband of 69 years Wallice W. Johnson, parents James Ellis and Agnes Freida Neyman, brothers, Joseph, George, Henry, James, John, and Paul Neyman and sisters Gertrude Thomas, Josephine Neyman, Ann Blackwell and Mary Murdoch. She is survived by her daughters Judy McCollum (Michael) of Clinton, Karen McCord (John) of Madison and her “Precious Presbyterian Pal”, Bobbie Roberts of Jackson. In lieu of flowers, memorials can be made to Hillcrest Baptist Church Mission Fund, 5950 Terry Road, Byram, MS 39272.

Helen Marie Neyman Johnson, 90, died Tuesday, February 26, 2019 at Hospice Ministries in Ridgeland, MS. Visitation will be Friday, March 1from 9:30 am &#8211; 10:30 am at Hillcrest Baptist Church in Byram followed by a Celebration of Life service... View Obituary & Service Information

The family of Mrs. Helen Neyman Johnson created this Life Tributes page to make it easy to share your memories.