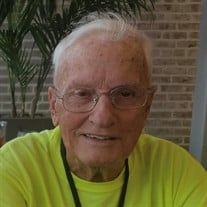 William “Bill” Rush died Saturday, November 28, 2020, due to complications from pneumonia. There will be a graveside service at 3:00 p.m. Saturday, December 05, 2020 at Lakewood Memorial Park in Jackson, MS. Mr. Rush was born November 23, 1927, in Pelahatchie, MS, to George and Minnie Rush. After high school, he served in the United States Army during World War II. Following his time in the service, he moved to Jackson and married Mary Lou Brent Day. This marriage gained him two stepsons, John Day and Brent Day. Mr. Rush spent many years managing Brent’s Nursery and Landscaping in Jackson and raising their son, Robbie. After Mary Lou’s death, he was married to Doris Johnson for many more years until her death. Following his retirement from the nursery, he worked for Coram Specialty Infusion Services as a driver, logging many miles. Mr. Rush continued working well into his seventies, but also enjoyed keeping his yard beautiful and letting the children and grandchildren play in the pool and feeding them with cookouts. In his later years, Mr. Rush attended St. Therese Catholic church, a wonderfully supportive congregation where many members assisted him with household needs and rides to services and appointments. After the death of his second wife, Mr. Rush moved into an apartment connected to the home of his good friend, Mr. Neal Chandler, who provided much special care in the last years, for which the family is extremely grateful. Mr. Chandler has become a member of the family in every way. Bill Rush, or “Papa Bill” as he was called, was an extremely hard-working and giving person. During his years at Brent’s Nursery, he became known for his mastery in nurturing and growing seasonal plants that were sold, working day and night depending on weather and growing conditions. He also lent his expertise to landscaping many Jackson landmarks of that era. He always was giving to family members, from random gifts to birthday and holiday presents, and supported many organizations behind the scenes. Papa Bill would always share his delicious banana pudding in the yellow bowl whenever there was a gathering. He made sure that his family never wanted in any way, but did it in a quiet, gentlemanly manner. Mr. Rush is preceded in death by his first wife, Mary Lou Rush and second wife, Doris Rush; son, William A. Rush, Jr. and step-sons, John W. Day, Brent Day, and Dixon Johnson; and brother, John Rush. He is survived by his son, Robbie (Diane); daughters-in-law, Julie Day and Leatha Johnson; grandchildren, Bobby (Hailee), Erin, Brady (Jeff), David (Kathryn), Taylor (Micheal), and Christen; and nine great-grandchildren.
To order memorial trees or send flowers to the family in memory of Mr. William Aubrey Rush, please visit our flower store.