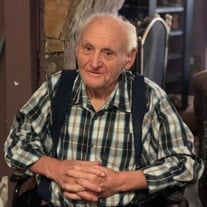 William Leslie Guess, 86, went to be with the Lord Saturday, September 12, 2020 at St. Dominic Hospital in Jackson. The family will receive friends for visitation on Thursday, September 17th from 9:30 a.m. until the 11:00 a.m. Funeral Service at Chancellor Funeral Home in Florence. Burial will follow at Floral Hills Memory Garden in Pearl, MS. William was born June 1, 1934 in Durant, MS to William and Louise Martin Guess. Formerly of Richland, he made his home in Magee for the past 24 years where he was a member of Kennedy Springs Baptist Church. William was a foreman at the Battery plant in Florence for many years. He had a love for old cars and looked forward to the car show at the state fair every year. One of his favorite past times was watching old westerns, at an extremely high volume, and sharing those with his great grandchildren. Preceding him in death is his wife Ruth Guess. They were married February 21, 1946 and were married for 46 years until her passing in 2002. Also preceding him were his parents, and brothers, Curtis and Jerry Guess. Those left to cherish his memory include his daughters, Shirley (Roger) Kelly of Florence, Joyce (Frank) Sampson of Magee, Linda (Perry) Rodgers of Pelahatchie, Betty Jo (William ) Berry of Florence, Lisa (John Thomas) Smith of Florence; brother, David (Patsy) Guess of Union; 9 grandchildren; 12 great grandchildren and several nieces and nephews.
To order memorial trees or send flowers to the family in memory of Mr. William Leslie Guess, please visit our flower store.