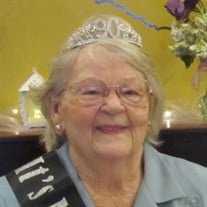 Webbie O’Dare Shows Hines, age 92, passed away peacefully on Monday, March 7, 2022 at Baptist Medical Center in Jackson, Mississippi surrounded by her loved ones. She was born on August 10, 1929 in Martinville, Mississippi to Baker and Eva Shows and was the fourth of eight children. Webbie grew up on an 80-acre farm, where her lifelong work ethic was developed beginning with picking cotton at age 5. She was raised in the Primitive Baptist faith and had many happy memories of attending church with her family. Webbie left high school during her senior year to move to Jackson and get a job to help support her family. While working at the GE Plant, she was set up on a blind date and met the love of her life, Robert Earl Hines. They were wed on December 24, 1948 and welcomed daughter, Nan, son, Bobby, and daughter, Tina. Webbie’s life centered around her faith and her family. She enjoyed attending school events, sports events, and other activities that featured her children, as well as trips to the beach, the mountains, and to visit relatives in Texas. Her greatest joy was teaching her children about the LORD and seeing them grow in their faith. Webbie and Robert were members of the group that organized the Jackson Primitive Baptist Church; they eventually returned to Webbie’s childhood church home, Good Hope Primitive Baptist Church in Martinville. Webbie’s hobbies included growing flowers and vegetables, attending church meetings across Mississippi and in other states, and spending time with her brothers and sisters and their families. She worked at a variety of businesses over the years, including School Pictures, The Frosted Dip burger stand, a Seale-Lily Ice cream shop, Eckerd Drugs, CVS, and the Pump & Save gas station at the Jitney-Jungle in Richland. The Hines home was a favorite hangout of the neighborhood children in Plain (now Richland), Mississippi, and Webbie was “everyone’s mom.” She used to say that she never knew how many children she would be feeding at any given meal, and she wouldn’t have had it any other way. Webbie had a sassy side and a delightful sense of humor, and she loved to laugh. She was blessed with the ability to find the joy in little things, from new tomatoes on the plants in her garden to seeing her azaleas bloom (which the early mild temperatures allowed her to do this year) to the “It’s a Small World” ride at Disneyworld. Webbie was preceded in death by her loving husband of 41 years, Robert Earl, and her son Bobby. She was also predeceased by her parents, brothers Trudell Shows, Felry Shows, and Townsend Shows; and sisters Vivian (“Tootsie”) Ross and Sara Stalls. She is survived by daughter Nan Kitchens and her husband Joe of Sevierville, TN and daughter Tina Hines of Richland, MS. She is also survived by her sister Lavina Stanford of Sumrall, MS; brother B.J. Shows of Vicksburg, MS; and numerous nieces and nephews. Chancellor Funeral Home in Florence, MS is handling arrangements. Visitation will be held on Friday, March 11 from 5:00-8:00 p.m. and Saturday, March 12 from 1:00-2:00 p.m. The funeral ceremony will follow at 2:00 p.m. Saturday in the Chancellor Chapel. Graveside services and interment will follow at Good Hope Primitive Baptist Church in Martinville, MS. Officiants will be Elder Mark Quarles and Elder Mike Sills. Pallbearers are Greg McNamara, Jay Shows, John Shows, Jeremy Stanford, Doug Warren, and Wesley Warren. Honorary pallbearers are Dr. Jeff Cumberland, Dr. Rod Shields, David Shows and Luke Stanford.
To order memorial trees or send flowers to the family in memory of Mrs. Webbie O'Dare Hines, please visit our flower store.