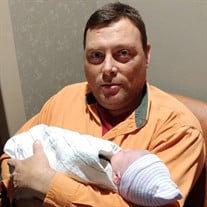 Tommy Dale Walters, Free mason and a longtime resident of Harrisville, Ms, died peacefully in his sleep in the early morning hours on August 4, 2019 at age 47 years old. Tommy is survived by his youngest brother Billy Walters Jr. and two loving sons Johnny (Cat) Walters and Jesse (Kaylee) Walters and two grandchildren Clarissa Ann and Roland Nikolas Dale Walters who they lovingly called “Pop Pop”. He is preceded in death by his parents Debra Garner and Billy Walters Sr. and several beloved grandparents and great grandparents. Tommy was born on September 2, 1971 in Jackson, Ms to Debra and Billy Sr. He graduated from Mendenhall High School in 1990. He retired from Ulmer Machine due to health issues. Later in life he graduated from Hinds Community College with an Associates in IT. Tommy was known for his friendliness and his sense of humor. He was a hard worker who put his all into everything he did. He was a devoted father and “Pop Pop”. He loved spending time with his boys and grandchildren. When he was not with his children or grandchildren, he enjoyed watching college football and Nascar with his brother Billy Jr. Visitation will be held Tuesday, August 6, 2019 from 9:00am until 11:00am at Harrisville Baptist Church. A graveside Service will follow in the Harrisville Cemetery.
To order memorial trees or send flowers to the family in memory of Mr. Tommy Dale Walters, please visit our flower store.