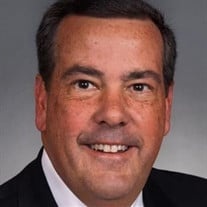 Thomas Connell Maloney, 64, of Mandeville, Louisiana, passed away on January 11, 2022. A loving father and husband, Tom was also a successful businessman who was known for his vision, character, practicality and ability to build meaningful relationships with almost everyone he met. His bright smile and infectious laughter were always a part of him, especially when telling a story about one of his many hunting and fishing adventures. Born in Jackson, Mississippi on July 24, 1957, to Patrick Joseph Maloney and Valerie Gunter Poe Maloney, Tom married Chris Lauderdale Maloney in 1981 and they had three children, Valerie Maloney Bell (Derek) of Nashville, TN, Jennifer Poe Maloney of Park City, UT, and Elizabeth Anne Maloney of Mandeville, LA. From an early age his girls learned the meaning of a servant’s heart, for Tom taught them the importance of serving others. He was their “go to” for advice, but he was their teacher through example. An avid outdoorsman, Tom loved fishing and hunting with friends and family. He was known as an exceptional cook, especially when preparing the fish he caught and game he hunted to share at a “friends and family” meal. A graduate of St. Joseph Catholic School, Tom attended Hinds Community College and graduated from the University of Southern Mississippi. He began his career with Mississippi Power and Light but went on to become Vice-President and Chief Operating Officer for Parkway Properties. He was the Owner/Operator of Chick-fil-A in Metairie, LA at the time of his passing. Tom is preceded in death by his parents. He is survived by his wife, Chris, of 41 years, his three daughters, his grandson whom he adored, George Bell of Nashville, Tennessee, and his brother, Robert William Maloney of Memphis, Tennessee. Services will be at St. Richard of Chichester Catholic Church in Jackson, MS on Saturday, January 15th. Visitation is at 9:30 a.m. followed by a Mass of the Resurrection at 11:00 a.m. The service will be livestreamed via St. Richard of Chichester Catholic Church's Facebook page. Memorial donations may be made to Big Brothers Big Sisters of America at bbbs.org or 2502 N. Rocky Point Drive, Suite 550, Tampa, FL 33607.
To order memorial trees or send flowers to the family in memory of Mr. Tom Connell Maloney, please visit our flower store.