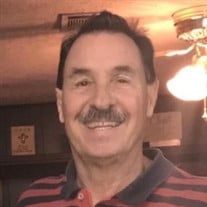 Timothy Michael McNair, 66, passed away Tuesday, January 5, 2021 at MS Baptist Medical Center in Jackson. There will be a Graveside Service on Saturday, January 9th at 2:00 p.m. in the Garden of Memories in Florence. Tim was born March 6, 1954 in Wichita Falls, Texas to the late Pat and Nan McNair. He was raised between Texas and Mississippi before settling in MS 40 years ago. He worked as a Route Salesman and excelled at his job. He was a self-driven salesman and that won him several awards and trips. He loved his two children, his grandson, and his grand dog “Patch”. He was a proud grandfather, never missing a game his grandson played in. Tim was an avid sports fanatic and he loved the Dallas Cowboys! Along with his parents, Tim is also preceded in death by his sisters, Linda and Peggye McNair. He is survived by his daughter, Jerra (Bradley) Weathersby of Florence; son, Ryan McNair of Pearl; grandson, Morgan Weathersby of Florence; brothers, Jerry McNair of Little Elm, TX and Eric McNair of Madison, WI; sisters, Tricia Deal of Wichita Falls, TX; mother of his children, Carrie McNair; several nieces, nephews, and other extended family members and friends. Online guestbook may be signed at www.chancellorfuneralhome.com.
To order memorial trees or send flowers to the family in memory of Mr. Tim McNair, please visit our flower store.