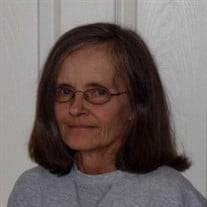 Theresa Mangum, 66, passed on from this life to the next on Sunday, March 08, 2020 at her home in Terry, MS. A Celebration of Life will be held on Saturday, March 14 at Chancellor Funeral Home in Byram. Visitation will be from 10:00 a.m. until the hour of the service at 11:00 a.m. The family requests that friends and family bring a single love flower of their choosing to be placed in memory of Theresa at the time of the service. Theresa was born on August 18, 1953 to the late Richard Smith and Mary Jane Horner in Claremore, OK. She retired from Kroger after twenty years where she was employed as a DSD Receiver. She enjoyed traveling, being outdoors, gardening, and spoiling her grandkids. Along with her parents, she was preceded in death by her daughter, Christy Perry. She is survived by her husband of 39 years, Donald G. Mangum of Terry; her three sons, Christopher Perry of Jackson, Thomas (Tonja) Mangum of Florence, and Jonathan (Jay Kay) Mangum of Brandon; brothers and sisters, Richard Smith, Tammy Smith, Sioux Grainger, and Ricky Smith; uncle, Hosea Wallis and aunt, Belza Wallis; cousin, Ladonna Peden; and three grand-children, Trinity and Dylan Mangum and Ella Perry. In lieu of flowers, donations may be made to the Blaire E. Batson Children’s Hospital. .
To order memorial trees or send flowers to the family in memory of Mrs. Theresa Ann Mangum, please visit our flower store.