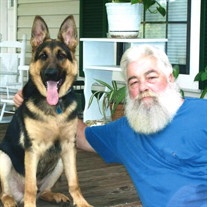 Terry Lyle Peterson, 63, of Raymond, Mississippi, died June 5, 2021 at home surrounded by his loving family. Terry was born November 23, 1957 in Los Angeles, California, but called Mississippi home. He was an avid outdoorsman, who loved hunting, fishing and gardening. A giant of a man, Terry was happiest in the mountains or on his bass boat. He married Linda Webb on February 16, 1985 and they journeyed through 36 years of life together. Terry was a devoted husband, loving father, proud PawPaw and fierce friend. Terry is preceded in death by his father-in-law, Major Webb; his uncle, Robert Peterson; and his niece, Kimberly Kessler Kuhlman. His memory will be cherished by his wife, Linda Webb; mother-in-law, Doris Webb; son, Christopher McClure (Katherine); daughter, Caree Slusher (Timothy); grandchildren, Victoria Ta'ler Musselwhite (Reece), James McClure, Elizabeth McClure, Joshua McClure, Joanna McClure, Sadie Slusher, and Gavin Slusher; great-granddaughter, Ava Rae Simmons; and his many brothers and sisters-in-law, nieces, nephews, neighbors and friends. Terry will also be greatly missed by his beloved German Shepherd, Jack. The family would like to extend a special thanks to all the hospice caretakers from Encompass Health and to Nurse Anne for her compassionate and tender care of Terry through his difficult illness. A visitation will be held at Chancellor Funeral Home in Byram, Mississippi on Wednesday, June 09, 2021 from 4:00 p.m.—6:00 p.m. At Terry's request, there will be no graveside service, but a memorial picnic will be held at the Peterson place at a later date. In lieu of flowers, the family prefers donations be made in Terry's honor to the Foundation for Mississippi Wildlife, Fisheries & Parks.
To order memorial trees or send flowers to the family in memory of Mr. Terry Lyle Peterson, please visit our flower store.