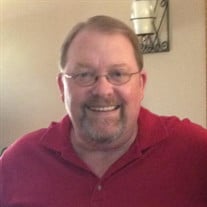 Steve Mitchell, 66, passed away on Tuesday, August 24, 2021 at Merit Health River Oaks in Flowood, Mississippi. Visitation will be held at Hickory Ridge Baptist Church on Friday, August 27, 2021 from 9:00 a.m. until the 11:00a.m. funeral service also at the church. He will be laid to rest at Liberty Baptist Church cemetery in Stringer, MS. Steve was born on September 20, 1954, to John Ranson and Barbara Jean Kelly. He was raised in Stringer, Mississippi, and has lived in Florence, Mississippi for the last 45 years. He married his childhood sweetheart and love of his life, Debbie Graham on March 8, 1974, and was a devoted husband, father and grandfather. He was a member of Hickory Ridge Baptist Church. Steve worked 42 years for Illinois Central/Canadian National Railroad. He loved spending time with his family and devoted his whole life to them. He enjoyed his retirement over the last seven years where he could devote time to his grandchildren and family. Steve is survived by his wife of 47 years, Debbie Kelly; son, Landon Kelly of Florence; daughter, Linsay Kelly Gaddis, of Florence; mother, Barbara Kelly-Sims of Stringer; sister, Sherry Tatum (Joe) of Las Vegas , Nevada; grandchildren, Kayden McLendon, Kyle McLendon, Jack Gadd and the family dog, his best friend, Lizzy. Steve also had a host of nieces and nephews.
To order memorial trees or send flowers to the family in memory of Mr. Steve Mitchell Kelly, please visit our flower store.