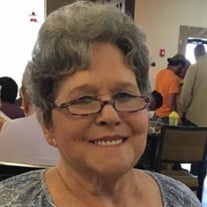 Sharon Lee Bunn, 71, passed into the arms of Jesus Saturday July 4, 2020 at St. Dominic Hospital in Jackson. A graveside service will be Wednesday July 8th at 10 am Chancellor Funeral Home’s Garden of Memories in Florence. Sharon was born August 25, 1948 in Connecticut to John and Charlotte Fette Tyler. She is remembered as a loving mother and grandmother. Sharon was a 1966 graduate of Forest Hill High School. She moved to Brandon in 2003 where she was a member of Crossgates Baptist Church. Later she became a resident of Brandon Nursing Home where she was one of their most active residents. She enjoyed reading and spending morning and evenings on the patio with a few of her favorite friends. One of her greatest loves was spending time with her great grandchildren. Those preceding her in death are her parents, John and Charlotte; a child, Brian Walsh; brothers, Jack Tyler and Michael Tyler. Left to cherish her memories include her daughter, Susie (Scott) May of Florence; sons, Jason (Christy) Bunn of Florence, Douglass (Pam) Walsh of Byram; brother, Mark Tyler of Dallas, TX; grandchildren, Chandler (Madison) May, Courtney May, Jacob Crosby, Valerie (Justin) Hoffland, Kristina Walsh, 5 great grandchildren, extended family and a host of friends.
To order memorial trees or send flowers to the family in memory of Mrs. Sharon Lee Bunn, please visit our flower store.