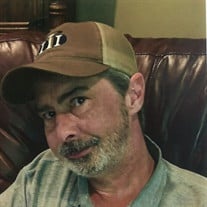 Russell Edward “Grumps” Wright, 50, passed away at his home in Byram on Tuesday, January 07, 2020. Visitation will be Saturday, January 11 at Chancellor Funeral Home in Byram from 10:00 a.m. until the memorial service at 12:00 p.m. A long-time resident of Byram, Mr. Wright was born to James Wright and Susie Groves in Ruleville, MS on April 02, 1969. After graduating from high school in 1987, he studied at Mississippi Delta Community College and the University of Southern Mississippi where he obtained a bachelor’s degree in engineering. He was employed with TransOcean for several years. Mr. Wright was a wonderful husband, dad, grandfather, and provider. He enjoyed fixing, repairing, and building things. Along with his parents, he was preceded in death by his brother, Phillip Wright. He is survived by his wife, Noritta Watridge Wright; daughters, Stephanie Gracen Wright of Flowood, Haleigh Wright of Byram, and Allyson Wright of Byram; brother, James Allen Wright of Pearl; and grand-daughter, Maeleigh Tracy.
To order memorial trees or send flowers to the family in memory of Mr. Russell Edward Wright, please visit our flower store.