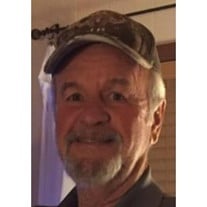 Ronald “Ronnie” Leon Yelverton, Sr, 70, passed away on Thursday, August 27, 2020 at St. Dominic’s Memorial Hospital in Jackson. There will be a Graveside Service at 10:00 a.m. on Saturday, September 12, 2020 at Rexford Cemetery in Simpson County. Rev. Ron Gomillion will officiate. Ronnie was born November 2, 1949 in Jackson, MS. He was a life-long resident of Rankin County and graduated from Florence High School in 1968. He worked as a land surveyor for most of his life. Even when he wasn’t working, he loved to be outside, especially when he was hunting. Ronnie was a Master Mason with the Evening Star Lodge #70 and a 32 Degree Scottish Rite Mason with the Jackson Scottish Rite Bodies. He also was a founding member of Star Volunteer Fire Department and an Honorary Deputy of Rankin County Sheriff’s Department. Ronnie was preceded in death by his father and stepmother, Evon and Elsie Yelverton; his mother and stepfather, Verda and Bill Smith; brother, Samuel Evon Yelverton, Jr.; and sister, Francis Jeanette Smith Alford of Lowell, AR. He is survived by his sons, Ronnie Yelverton, Jr of Star and Thomas Yelverton of Magee; daughter, Cassie Shook of Brandon; sister, Nancy Anderson of Edgewater, FL and Sandra Kay Riley of Winchester, KY; brother, Louis Dwayne Atchison of Winchester, KY; the mother of his children, Marilyn Yelverton of Star; and grandchildren, Triston, Alaina, Keaton and Elyza.
To order memorial trees or send flowers to the family in memory of Mr. Ronnie L. Yelverton Sr., please visit our flower store.