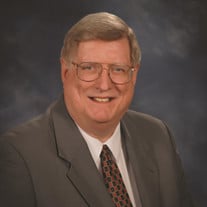 Rev. Ronald “Ron” James Tullos, 69, passed into the arms of Jesus on Thursday, August 6, 2020 at MS Baptist Medical Center in Jackson. He will be laid to rest in the Garden of Memories in Florence on Thursday, August 13th at 10:00 a.m. Chancellor Funeral Home will go LIVE on their Facebook page from the cemetery. Ron was born September 8, 1950 to the late Billy and Ethelene Tullos in Jackson, MS. He graduated Mississippi College with a Bachelor’s in Church Music in 1973 and received his Masters of Religious Education / Church Music from New Orleans Baptist Theological Seminary in 1977. He served as a Music Minister in churches across Mississippi and Georgia. He also worked as a church consultant with Lifetouch Church Directories for many years. He was a member of MS Baptist Singing Churchmen and was the director of the Copiah County Associational Choir. Ron enjoyed gardening, watching classic Westerns, and spending time with his favorite dogs, Max and Niki. Ron is survived by his wife of 47 years, Betty J. Tullos of Braxton; sons, Joel Tullos of Braxton and John Tullos of Brandon; daughter, Jennie Brantley of Pearl; granddaughter, Morgan Tullos of Braxton; and brother, Duewayne (Carrie) Tullos of Clinton. Online guestbook may be signed at www.chancellorfuneralhome.com.
To order memorial trees or send flowers to the family in memory of Rev. Ronald "Ron" James Tullos, please visit our flower store.