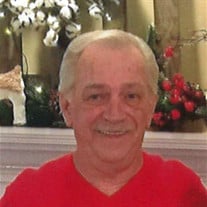 Ronald Max Farmer, a loving husband, father, and grandfather, passed away on January 17, 2020 at Hospice Ministries. He was 73. Visitation will be Sunday, January 19, 2020 at Chancellor Funeral Home in Byram from 3:00 until the hour of the service at 4:00 p.m. Mr. Farmer was born in Shreveport, LA on January 18, 1946 to Donald Hugh Farmer and Marrie Jinks. A long-time resident of Jackson and Raymond, he was a member of Alta Woods Baptist Church. He was employed as the District Supervisor for the Clarion Ledger and later owned and operated “R & R” Trucking of Jackson. He continued to drive trucks for Cat Transportation. Mr. Farmer enjoyed bowling and won many trophies, but his favorite past-time was being with his family. Along with his parents, he is preceded in death by his daughter, Kimberly Michelle Farmer. He is survived by his wife, Rita Burnham Farmer, to whom he was faithfully married for 45 years; sons, Craig (April) Farmer of Sumrall, Darren (Linda) Lasley of Raymond, and Scott Lasley of Raymond; daughters, Meg (Josh) Burns of Brandon and Dana (Steven) Crews of Azel, TX; brother, Gary (Linda) Farmer of Cuba, AL; sister, Janice (John) Brown of Terry; and four grandchildren, Hayden, Treston, Anna, Paxton, Lexie, Jonathan, Promise and Sarah. Memorials may be made to Alta Woods Baptist Church.
To order memorial trees or send flowers to the family in memory of Mr. Ronald Max Farmer, please visit our flower store.