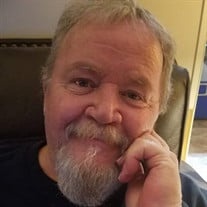 Roger A. Pitts, 64, passed away Friday, October 30, 2020 in Brandon. The family will receive friends for visitation on Monday, November 2nd from 5:00 – 8:00 p.m. at Chancellor Funeral Home in Florence. There will be another visitation on Wednesday, November 4th from 1:00 – 2:00 p.m. followed by a Celebration of Life Service beginning at 2:00 at Mt. Pisgah Baptist Church. Roger was born to Bob and Deloris Pitts on February 19, 1956. From the beginning, Roger was a character. He was not a fan of structure, instead finding anything that could get him into trouble and would end with a good story. Most knew Roger as someone who always had a smile on his face. He never met a stranger and did his best to make everyone feel like they were a part of his family. Throughout his life he took on many different roles: life of the party, storyteller, instigator, comedian, son, brother, husband, father-in-law, and most importantly, Daddy and grandfather. He loved fiercely and he taught his children to live life to the fullest. He instilled a love and appreciation of music into each of his babies, of which is reflected in the soundtrack of their lives. He taught them to lean on music for healing and happiness. Roger played the role of extended father to many of his children’s friends. From SSG James Taylor Trest: “Daddy Roger was a true family man, and even loved me like one of his own. He was so proud of his kids and was always there when you needed him. Every time I came home from overseas or across the country, I always made sure I stopped and spent time with Daddy Roger. I miss you and love you very much.” He will be deeply missed and will live on forever through stories and memories. Roger was larger than life and has officially reached legend status. Survivors include his wife of 21 years, Gigi Pitts of Brandon; six children: Charlene Williams (Preston) of Jackson, Rachel McCollum (Michael) of Pisgah, Jenny Manning (Chris) of Brandon, Addison Pitts of Brandon, Matthew Moose of Brandon, and Jonathan Moose (Jessica) of Augusta, GA; one brother, Bob Pitts of Texas; two sisters, Cindy Hemphill of Brandon and April Crenshaw of Byram; six grandchildren; and numerous other relatives and friends.
To order memorial trees or send flowers to the family in memory of Mr. Roger A. Pitts, please visit our flower store.