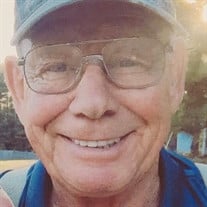 Robert Rodney Vance, 83, went home to the Lord on Sunday, May 15, 2022 in Jackson, MS. Visitation will be held at Little Providence Baptist Church in Picayune, MS on Friday, May 20, 2022 from 11:00 a.m. until the hour of the service at 12:00 p.m. Interment will follow at the Little Providence Baptist Church Cemetery. A recent resident of Byram, Rodney was born on October 09, 1938 in Kansas City, MO and resided in Picayune, MS. He was a veteran of the U.S. Navy, serving during the Vietnam War. Rodney was very interested in family genealogy and managed to trace his family name all the way back to the Revolutionary War, beginning with himself; then his father, Ira Madison Vance, who died in 1970; John Robert Vance in 1949; James M. Vance in 1933; Robert Joseph Vance in 1923; William Vance in 1867; and finally, Captain Robert Vance in 1818. Rodney was an electrical engineer by trade, but he was also a do-it-all Renaissance man who wasn’t afraid to take to YouTube and find out how to do anything he wanted to learn. He enjoyed gardening and fishing. Most of all, he loved his family and the Lord. He was a fine Christian man who exemplified the Love of Christ. Rodney never met a stranger and was a friend to all. He was preceded in death by his parents, Ira Vance and June Peterson Vance; wife, Sarah B. Vance; son, Robert Michael Vance; and brother, Kenneth Vance. He is survived by his wife, Edna Rutland Vance of Picayune; daughters, Vickie Demarest of Loganville, GA and Kim Vance Lyons (David) of Rock Springs, WI; son, Charlie Vance (Michelle) of Red Oak, IA; step-children, Janie Lasseigne (Bert) or Pearlington, Julie Walker of Bay St. Louis, and Loni Rutland of Florence; sister, Barbara Pierson of Burleson, TX; brothers, Ted Vance, Harold Vance (Libby), and Milton Vance (Micky), all of Burleson, TX; and many grandchildren and great-grandchildren.
To order memorial trees or send flowers to the family in memory of Mr. Robert Rodney Vance, please visit our flower store.