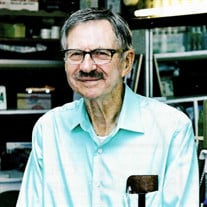 Robert “Bob” Welton Smith of Vicksburg passed away Friday, May 20, 2022, at the Vicksburg Convalescent Home in Vicksburg with his family by his side. He was 86 years old. The family will receive friends for visitation on Tuesday, May 24th from 9:30 until the 11:00 a.m. funeral service at Chancellor Funeral Home in Florence. He will be laid to rest in the Garden of Memories. Those serving as Pallbearers include Robert Head, Willis Finch, Reggie Head, Johnny Beauchamp, Tim Metz, and Paul E. Smith ll. Bob was born July 6, 1935, in Sardis, MS to the late Estus Ethel and Ruth Alice Walters Smith. He was a faithful Member of First Baptist Church in Clinton. Bob worked as a produce manager for Winn Dixie for several years prior to becoming a licensed Barber. He then went on to receive his cosmetology license. After receiving both licenses, he opened Bob’s Cut & Curl in Fondren where he worked for 51 years. He was very proud to boast about his Salon’s celebrity status by being in the movie “The Help”. Bob was a dedicated member of the Mississippi Cosmetology Association for 30 years, where he served as treasurer for several years. He also served on the MCA Design Team much of those 30 years. He enjoyed traveling with the Team across the State to share his talent. When Bob was not working or traveling, he spent much of his time in his many gardens. He produced the BEST okra around! He was loved and admired by so many. At family gatherings, we could always depend on him to lead us in prayer, followed with one of his many stories. He had a great sense of humor that always brought loads of laughter. Bob’s family wishes to extend a HUGE Thank you to Promise and Staff and to the Vicksburg Convalescent Home and Staff and Pauline Vessel and Amy Brown, for the Love they shared to Bob. You were his extended family. Along with his parents, Bob is also preceded in death by his first wife, Sarah Pace Smith. He is survived by his wife, Wanda Beauchamp Smith of Vicksburg, MS; brother, Welborn “Smitty” Smith (Mary) of Lincoln, NE, and Paul E Smith (Pat) of Lincoln, NE; sisters, Dean Dearing (Joe) of Pearl, MS and Linda Smith Pullen of Pearl, MS; his Children, Karoline Finch (Willis), Deborah Jean Neary, Donna Head (Reggie), Johnny Beauchamp (Tammy), and Robert Bradly Smith; Grandchildren, Sarah Neary, Hannah Neary, Jason Finch (Tiffiney), Shauna Finch, Robert Head (Carrie), Micheal Head (Ronda), and Anna Beauchamp; Great grandchildren, Victoria Hoeft, Avae Finch, Mya Hoeft, Corey Finch ,Ansley Finch , Corvin Finch, John Ryan Head, Jonathan Head, David Head, and Andrew Head; as well as Numerous nieces and nephew. In lieu of flowers, the family request memorials be made to Shriners Children’s Hospital in Bob’s honor.
To order memorial trees or send flowers to the family in memory of Mr. Robert "Bob" Smith, please visit our flower store.