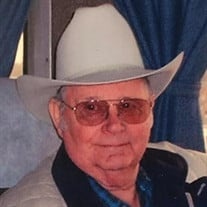 Robert “Bob” Sidney Norsworthy, Jr. passed into the arms of Jesus on Monday, February 14, 2022 at his home in Florence. He was 96 years old. The family will receive friends for visitation on Thursday, February 17th from 5:00 – 7:00 p.m. at Chancellor Funeral Home in Florence. The service will be Friday, February 18th at 10:00 a.m. with visitation again from 8:00 – 10:00 a.m. prior to the service. Burial will follow in Florence City Cemetery. Bob was born January 15, 1926 in Jackson, MS to the late Robert and Kate Norsworthy. He moved to the Florence area from Jackson in 1952 and was a member of Marvin United Methodist Church. Bob served his country in the U.S. Navy during WWII. He worked for the state of MS for many years before retiring from the Army National Guard as a Lt. Col. He also worked as a farmer for many years. He enjoyed his horses, playing golf, and reading. Along with his parents, he is also preceded in death by his sister, Martha Farrish. Bob is survived by his wife of 69 years, Blance Norsworthy of Florence; daughter, Ann (Darryl) Bruemmer of Texas; sons, Sid (Dine) Norsworthy of Florence and Mark (Karen) Norsworthy of Florence; grandchildren, Kimberly Sykes, Paul Bruemmer, Robert Sidney Norsworthy IV, Dena Kate Norsworthy, Katie Norsworthy, and Paden Norsworthy; and great grandchildren, Hailey Sykes, Madison Sykes, and Hudson Bruemmer.
To order memorial trees or send flowers to the family in memory of Mr. Robert "Bob" S. Norsworthy Jr., please visit our flower store.