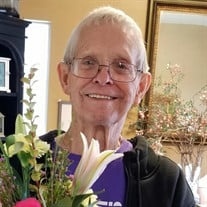 Richard Allen Rowland, 84, of New Iberia, LA, passed away peacefully in his sleep on Thursday morning, May 19, 2022 at his nursing home in Byram, MS. He was born November 28, 1937 in Sacramento, CA, the second of five children. He graduated high school. Then, at 18 years old, he joined the Navy in February 1956. He chose the Navy because he loved the water. In 1960, while stationed in Lafayette, LA he met and married his bride and welcomed his first child. In February 1962, he was honorably discharged from the Navy after serving for six years on two ships. He then settled in Lafayette and grew his young family. In 1971, he moved his wife and four young children to the Houston, TX area. Here, for many years, he was active in his church, he took his family on many camping adventures, and he pursued his hobbies of sailing and collecting Corvairs. In time, his three older children moved out to pursue their own lives. Unfortunately, in 1986 Richard could not escape the economic devastation of the 4-year long collapse of the oil industry in Houston and he ended up losing a great deal, including his job and his home. So, in 1987, he moved his remaining family to South Carolina. Here he was again active in his church and enjoyed the beautiful outdoors when he could. At the end of 1989, his youngest child moved out to pursue her own life. In time, the empty nesters left South Carolina and moved from place to place for a while. Finally, in 1997 they landed in New Iberia, LA to live in semi-retirement. Here they were active in their church, traveled when they could, stayed in touch with old friends, and occasionally saw family. When Richard eventually needed more care than could be provided in his home, he was moved to Willow Creek Nursing home, where he was visited regularly and cared for until his death. Richard is survived by his wife of 62 years, Ruby Noella Clark Rowland; by his four children - Alan Rowland (and wife Thelma), Tammy Messer, Lisa Wright (and husband Shayne), and Cherie Smith (and husband Ralph); by eight of his nine grandchildren - Tiffany McInturff (and husband Alex), Michael Rowland, Casey Henry (and partner Jimy), David Messer (and wife Tristan), Andrew Messer (and fiancé Shayna), Brenna Saxton (and husband John), Bianca Smith (and husband Sebastian), and Cody Smith; by his six great-grandchildren - Dani Rowland, Sully Rowland, Raya Virachack, Rylan Virachack, Savannah Smith, and Macallan Messer; by his sisters - Pat Bernard and June Madden (and husband Mickey); by his sister-in-law Pat Bahr; as well as by numerous nieces, nephews, cousins, and friends. He was preceded in death by his sister, Michelle “Sherrie” Stevens; his brother, Bob Rowland; his brother-in-law Norman Kiesewetter, Sr.; his brother-in-law AJ Bernard; and his grandson, Mark Rowland. Friends and family are welcome to join us in a Celebration of Life on Friday, May 27th starting at noon. Flowers can be sent to this same address. Warehouse 535 535 Garfield Street Lafayette, LA
To order memorial trees or send flowers to the family in memory of Mr. Richard Allen Rowland, please visit our flower store.