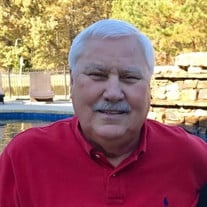 Richard “Rick” Math Kale, 70, passed away after a brief illness in Pensacola, FL. The family will receive friends for visitation on Friday, November 13th from 5:00 – 7:00 p.m. and again Saturday, November 14th from 1:00 – 2:00 p.m. all at Chancellor Funeral Home in Florence. There will be a private family service at 2:00 p.m. in the chapel followed by a public Graveside Service in the Garden of Memories. Born in Pavo, GA, attending high school in Andalusia, AL, graduating from Memphis State University in Memphis, TN, and married in Jackson, MS, Rick considered himself a good ole southern boy! While graduating with a Bachelor’s Degree in Education, he decided to go into the transportation business, eventually starting his own trucking company, along with his partner, John Stomps. After 16 years, in 2007, he retired to Orange Beach, AL. Rick led a full life, raising 4 children, being Papa to 8 wonderful grandchildren, and being married to his wife, Ruth for 42 years. Rick had so many true and faithful friends of whom he loved and cherished so much. His daughters and sister-in-law had a few thoughts when they think about him. If you knew Rick, you can hear him saying “Whoa, Whoa, Whoa”. Rick always had a way of convincing anyone to go outside their normal comfort zones in life and try new things. Including, tasting raw oysters in New Orleans. Surprisingly, they were quite tasty! He was always ready for a good time, he cherished traditions, he was a loving Papa and family man. He never met a stranger, was always down for a party, and loved to see his guest have a good time. He was like “Wal-Mart”, he always had anything and everything you wanted. He had a way of giving advice that was down on your level. For example, telling you to put your “big girl panties on and deal with it”. Rick will be missed dearly by all those who knew him. Rick is preceded in death by his parents, Paul and Lois Bennett Kale; brother, Wayne Kale; and son, Richard Matthew Kale. He is survived by his wife of 42 years, Ruth Kale; his three daughters, Leigh Kale White, her husband, Rodney, and their children, Dylan, Parker, and Austin; Randi Kale King, her husband, Brent, and their children, Carter, and Bailey; and Reagan Kale and her children, Easton, Rawling and Tyson.
To order memorial trees or send flowers to the family in memory of Mr. Richard "Rick" M. Kale, please visit our flower store.