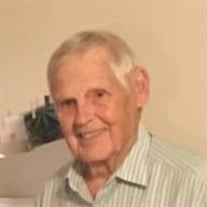 Mr. Ray Edward Bell, 93, passed into the arms of Jesus on Sunday, August 23, 2020 at St. Dominic’s Hospital in Jackson, MS. The family will receive friends on Tuesday, August 25th from 5:00 – 7:00 p.m. and again, on Wednesday, August 26th from 10:00 – 11:00 a.m. all at First Baptist Church of Florence. The Funeral will begin at 11:00. Burial will follow at Florence City Cemetery. Ray was born December 14, 1926 in Union County, AR to the late Jack and Hattie Mae Bell. He has called Florence home since 1994 where he was an active member of the First Baptist Church. He and his beloved wife, Billie served as a Missionary in Africa then, as House Parents at Georgia Baptist Children Homes. He was also a Veteran of the U.S. Navy (Sea Bee’s) where he was stationed in Okinawa during WWII. He was a 32nd degree Mason and he worked in maintenance at Holiday Inn where he eventually retired. Along with his parents, Mr. Bell is preceded in death by his son, Eddie Bell; 5 brothers, and 1 sister. He is survived by his loving wife of 73 years, Billie Bell of Florence; son, Gary (Lisa) Bell of Richland, MS; sister, Robbie Lee Brooks “Sissy” of Beekman, LA; grandchildren, Stephanie Bell, Brandi (William) Harris, and Andrea (Jacob) Goodwin; and great grandchildren, Gyle, Mason, Zoie, Bailee, and Sadie. In lieu of Flowers, the family request memorials be made to First Baptist Church of Florence International Mission Funds.
To order memorial trees or send flowers to the family in memory of Mr. Ray Edward Bell, please visit our flower store.