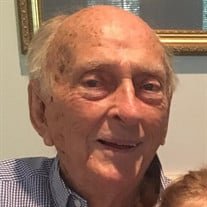 Robert Kenneth ‘Jack” McInnis, 91, went to be with the Lord on Thursday, October 24, 2019 at St. Dominic Hospital in Jackson. Visitation will be at Chancellor Funeral Home in Byram on Sunday, October 27, 2019 from 2-4 p.m. and again on Monday, October 28th 8:30am until the 9:00 a.m. funeral service. Interment will follow at Lakewood South. Jack was a devoted husband and father. He was a teacher in his church, and a lifelong student of the Bible. After a working life as an Electrical Contractor in Jackson he retired to enjoy his garden, his friends and especially his grandchildren and great grandchildren. He will be remembered for these things and for his love for righteousness. He is preceded in death by his parents, Robert Paul McInnis and Katie Leigh McInnis; beloved wife, LaVerne McInnis in 2016 and sister, Pauline Halle. Survivors include his sons, Gary (Gayle) McInnis of Clinton and Glade (Emily) McInnis of Clinton; daughter, Deena McInnis of Raymond; grandchildren, Paul McInnis of CO, Bryan (Jessica) McInnis of AK, Kimberly (Tommy) Damron of FL, Hannah McInnis of ME, Sean McInnis of Clinton, MS, Michael Ray Robertson (Donna) of AL, Zan (Kaitlin) Hare of TX and Savanna Hare of Raymond, MS; great grandchildren, Ava, Jackson, Tyler, Wilder and Adalynn. Memorials may be made Little Light House at 5301 Old Canton Rd., Jackson, MS 39211. On line guest book available at www.chancellorfuneralhome.com.
To order memorial trees or send flowers to the family in memory of Mr. R.K. "Jack" McInnis, please visit our flower store.