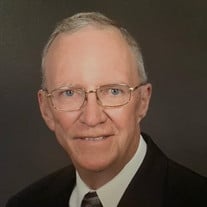 Philip Arnold Gregor passed into the arms of Jesus on Thursday, April 14, 2022 at his home in Florence. He was 80 years old. The family will receive friends for visitation on Saturday, April 16th from 10:00 a.m. until the 11:00 a.m. funeral service all at Chancellor Funeral Home in Florence. He will be laid to rest in the Garden of Memories. Mr. Philip was born August 11, 1941 in Brewer, Maine to the late Edward and Evelyn Gregor. He was raised in Yarmouth, Maine until moving to Mississippi 43 years ago. He was a member of First Baptist Church of Florence. He loved being a truck driver and he drove for Yellow Freight Trucking for many years. He loved his family and loved spending time with them. He enjoyed traveling to the mountains with Mrs. Celia. He was always checking on his family and when they were on the road, he could tell you exactly where you were and what lied ahead. He was considered to be a man of high character and he was also very articulate. He enjoyed doing yard work and it showed. His yard was always pristine. Along with his parents, Mr. Gregor was also preceded in death by his brother, Paul Gregor. He is survived by his wife of 60 years, Celia Gregor of Florence; daughters, Cindy Davis of Brandon, Pam Welborn of Madison, and Heather Gregor Allen of Brandon/Brookhaven; sister, Pat Ricker (Gary); brothers, Robert Gregor (Cora) of Atoka, TN and Edward Gregor of Texas; 6 grandchildren, Trish Lawler Pena (Mike) of Quantico, VA, Brian Davis (Elizabeth) of Las Vegas, NV, Megan Welborn (Austin) of Byram, MS, Brandon Welborn of Brandon, MS, Stephen Allen (Taylor) of Brookhaven, MS, and Danielle Allen of Brookhaven, MS; as well as 6 great grandchildren.
To order memorial trees or send flowers to the family in memory of Mr. Philip A. Gregor, please visit our flower store.