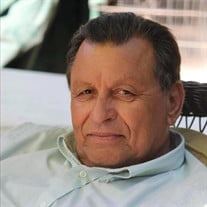 Pete Enriquez, 76, passed into the arms of Jesus at home while surrounded by his adoring family. There will be a visitation Saturday, May 1, 2021 at Chancellor Funeral Home in Florence, MS from noon until 2:00 PM. A memorial service will follow the visitation in the Chancellor Funeral home chapel. Everyone is invited to attend. Mr. Pete Enriquez was a proud native of Cleveland, MS where he was raised with his eleven siblings. This is also where he met the love of his life, his teenage bride, Sarah Lara. For 56 years they modelled selfless devotion and faithfulness to their family, friends, church, and community. They relocated to Pearl, MS to begin a career with Rankin County as a heavy equipment operator. During much of this time he was a leader at Quest Community Church in Florence. His passion in life was the Lord, his family and helping anybody who needed help. His leadership was instrumental in the establishment of a medical mission ministry in Piedras Negros, Mexico. He enjoyed a variety of good music including Elvis and gospel music of all sorts. He was widely known for his laughter, his sense of humor, and his enormous generosity. Pete is preceded in death by his parents, Nick and Mary Enriquez; sibling, Joe Enriquez, Mary Helen Ferri, and Alice Smith; his son-in-law, Joe Harkins; and his grandson, Jason Nicholas. He is survived by his wife, Sarah Enriquez of Pearl; daughters, Sheila (Danny) Enriquez Adams of Pearl and Donna Harkins of Madison; son, Pete (Paula) Enriquez of Madison; grandchildren, Jordan (Josh) Scott, Madison (Patrick) Molpus, Conner Enriquez, and Spencer Harkins; great grandchildren, Brooklyn Scott, Jace Scott and Harkins Molpus; brothers, Nick (Mary Louise) Enriquez, Jr. and Robert (Tina) Enriquez; sisters, Olivia (Daniel) Lara, Josephine Enriquez, Victoria (Roy) McKnight, Dora (Greg) Hobdy, Martha Enriquez, and Cecilia (Mike) Lucio; and numerous nieces and nephews.
To order memorial trees or send flowers to the family in memory of Mr. Pete Enriquez, please visit our flower store.