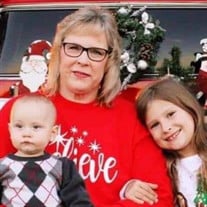 Paula Jean Lambert, 59, was received into the arms of Jesus on Sunday, December 12, 2021 while surrounded by her loving family. There will be a memorial visitation on Friday, December 17, 2021 from 5:00 PM to 7:00 PM at Chancellor Funeral Home in Florence, MS. Another memorial visitation will take place on Saturday, December 18, 2021 from 10:00 AM to 11:00 AM. The memorial service for Paula will be at 11:00 AM on Saturday, December 18, 2021. Paula’s childhood was spent in Pearl, MS and she attended Flowood Baptist Church where she was baptized and met her future husband, Kenny, for the first time. She graduated from Rankin Academy in Star, MS in 1980. It was in high school that Paula and Kenny reconnected and began dating and in 1982 they began their life together as husband and wife. Upon graduation from high school she began attending Hinds Community College where she learned to be a legal secretary and enjoyed a successful career in that field for 20 years. Toward the end of her career as a secretary she decided that she wanted a new career that didn’t involve sitting behind a desk all the time. So, in addition to being a wife, mother of two energetic little boys, and a full-time legal secretary she returned to Hinds Community College at night to pursue a degree in nursing. Once again, she joined a graduating class, this time with a bachelor’s degree in nursing. Her career in nursing began at River Oaks Hospital in Flowood, MS in the surgical department and then to Fresenius Kidney Care in Jackson, MS. For the last 13 years of her life she devoted her love and skill to working primarily with pediatric dialysis patients at the University of Mississippi Medical Center, in Jackson, MS. Paula’s priorities in life were the Lord and her family. She was known by her family and friends as an enormously generous person. Her gift was giving and giving she did! God created her to be a caregiver and she fulfilled that call with excellence. She was passionate about cooking and baking. Many of her family and friends called her “Paula Dean.” Until her death she was a faithful, active member, volunteer and leader at Quest Community Church in Florence, MS. After offering her periodic, well thought out, and inspiring call to worship, her pastor would often quip that she was a better preacher than he was. Those in heaven who have been waiting for her arrival include her mother, Queen Evelyn Walters; maternal grandparents, Queen Victoria and S.A. Winstead; paternal grandparents, Onie and J.S. Walters. Those broken-hearted family members who will always cherish her memory include her adoring husband of 39 years, Kenny Lambert of Brandon, MS; sons, Andrew Lambert of Brandon, MS, and Brandon (Elizabeth) Lambert of Pearl, MS; grandchildren, Maddy and Benjamin Lambert; father, Billy Joe (Melinda) Walters of Florence, MS; sister, Sheila (Jim) Meadows of Florence; sister-in-loves, Rita (Ricky) Harrison, and Anita (Ken) Wallace; step-sisters, Ashley (Bill) Hutson, and Emily Stevens; her furry friends, Rebel and Pedro; and numerous nieces and nephews.
To order memorial trees or send flowers to the family in memory of Mrs. Paula Jean Lambert, please visit our flower store.