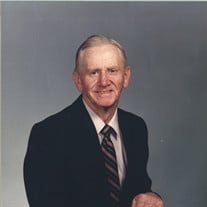 Patt Casey Dodd, 89, went to be with the Lord Jesus Christ on February 09, 2020 after an extended illness. Visitation will be at 10:00 a.m. Friday, February 14, 2020 at First Baptist Church of Byram with services to follow at 11:00 a.m. Interment will follow at Zion Hill Baptist Church Cemetery in Wesson, Copiah County, MS. Patt was born in Zamma, Attala County, MS on April 08, 1930 to Cleophus Patterson Dodd and Iva Lucille Casey Dodd. He is preceded in death by his parents and his sister, Cleo Marie Dodd Kern. Patt is survived by his wife of sixty-six years, Mary Bernice McInnis Dodd and their son, Tracy Kevin Dodd of Jackson, MS along with family members, Cladell McInnis Layton of Ridgeland; Charles McInnis, Wayne and Carolyn McInnis, and Betty Sue McInnis, all of Wesson, MS; and a host of nieces and nephews. Patt lived in the Jackson area for most of his life. He served in the United States Air-force during the Korean War. He began his vocational career with Entergy Mississippi, from which he retired after thirty-nine years. Patt was an ordained Baptist Deacon, taught Sunday School, and sang in the Sanctuary Choir at Hillcrest Baptist Church in Jackson, MS. At the time of his death, he was a member of First Baptist Church in Byram, MS. Patt was known to be a fervent believer in prayer. He was often called to pray appropriate prayers at numerous occasions. His clear, strong voice spoke with sincere conviction in his talks to the Lord. From work-place to family gatherings, Patt was often called to render meaningful, heartfelt prayers, which he delivered with grace and eloquence. Patt can be remembered as a very loving, caring family man with an easy, friendly nature. He had the unique ability of never meeting a stranger anywhere that he went. Among his interests was the love of music. He was an avid guitar player and singer. He also built and collected clocks, which showcased his talent in this area. Patt loved and prayed for his country, family and friends; most of all, he loved his God and Creator, the Lord Jesus Christ.
To order memorial trees or send flowers to the family in memory of Mr. Patt Casey Dodd, please visit our flower store.