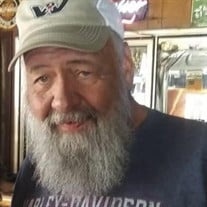 Noble Patrick Smith, III (Pat), passed away August 30, 2020 in Raymond, MS at home after a long battle with cancer. Visitation will be held from 10AM – 12PM, Saturday, September 5, 2020 at Chancellor Funeral Home in Byram, MS. Noble Patrick Smith, III was born April 7, 1956 in Jackson, MS to Barbara and Noble Patrick Smith, Jr. Pat was born and raised in Jackson, MS and later moved to Raymond, MS. Pat was a outside salesman for Empire Truck sales for twenty plus years. Growing up, Pat would spend the summer with his grandfather and cousins at the Smith Family Fish Camp on the Pascagoula River. Pat loved to go drag racings and dirt track racing in his younger years. He enjoyed having people over for cookouts, and spending time with his family and friends and riding his motorcycle. Pat loved to tell stories with and of his family and friends and when he was telling you a story it was always going to be told with his hands just a moving as fast as his mouth was telling the story. Pat was preceded in death by his loving parents, his Uncle Jimmy Smith, and Cousin Ronnie Davidson. He is survived by his wife, Cindy; sisters, Beth (George) James and Dee (Bernie) Meadows; his daughter, Dana Smith; step-daughter, Michelle Miller; step-son, Chris Vaughn; grandchildren, Kaleb Frazier, Chance Miller, and Autumn Miller and man’s best friend, Cowboy; along with numerous family members and friends. In lieu of flowers, the family is asking for donations to be made to The American Cancer Society.
To order memorial trees or send flowers to the family in memory of Mr. Pat Smith, please visit our flower store.