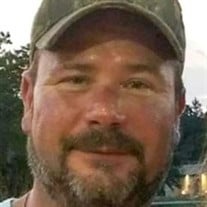 Nickey Joe Hartzog, 55, of Terry, MS, went to be with the Lord Saturday April 23, 2022. The family will receive friends, at Chancellor Funeral Home, Sunday April 24, 2022 from 5pm-7pm and again Monday April 25, 2022 from 10am -11am. The funeral service will begin at 11am at Chancellor Funeral Home Chapel in Byram. Nickey was born in Jackson, MS on February 24, 1967 where he lived until he and his wife moved to Terry in 2002. He had many friends from elementary to high school from South Jackson that he remained friends with throughout his life. Nickey loved the outdoors and was an avid hunter and fisherman. He also loved to cook for Dawn and Colbie. Dawn and Colbie are thankful for the time that they had with him and that he is perfectly healed now. He is preceded in death in by his parents James and Norma Hartzog and his sister in law Mandy Hartzog. He is survived by his wife of 29 years, Dawn Hartzog; daughter, Colbie Hartzog; his beloved dog Sadie; brothers, James (Susan) Hartzog, Mike Hartzog; sister, Sandra Funderburke and multiple nieces and nephews.
To order memorial trees or send flowers to the family in memory of Nickey Joe Hartzog, please visit our flower store.