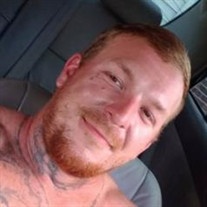 Nicholas “Bubba” Robertson passed away on February 13, 2020 at University Medical Center. He was twenty-six. Visitation will be at Jackson First on Wednesday, February 19, 2020 from 11:00 a.m. until the hour of the service at 12:30 p.m. Nicholas was born to Mike Robertson and Kim Ainsworth Robertson on February 02, 1994 in Jackson, MS. He attended Terry High School and was self-employed in construction. He was of the Assembly of God faith and loved Jesus. Nicholas was fun-loving and fearless. He never met a stranger or discriminated amongst races. He was a very encouraging person who knew how to make other people feel wonderful about themselves. He loved to sing. He loved his children more than anything in the world and had an extra-special bond with his dad, Mike, loved his mom, and loved his siblings with his whole heart. Bubba had a special place for his step-daughter’s dad, Pete Lee Johnson and thought of him as a brother. He was preceded in death by his grandmother, Carolyn Grant Ainsworth and grandfather, Pete Robertson. Along with his parents, he is survived by his step-daughter, Kirsten Johnson and his sons, Brantley, Gage, and Channing Robertson, all of Raymond; the mother of his children, Kristina Southern Robertson; brothers, Adam Robertson (Hollie) of Pearl, Jacob (Sierra) Robertson of Pearl, Juston (Taffie) Robertson of Calhoun City, Preston Robertson of Hattiesburg, and Zachary (Maylin) Robertson of Brandon; sister, Sarah (Patrick) Robertson McCrory of Kosciusko; ex sister-in-law, Amber Robertson Barrett of Hattiesburg; grand-parents, Mack Ainsworth and Sarah and Asie Upchurch; and extended family and a host of friends.
To order memorial trees or send flowers to the family in memory of Nicholas "Bubba" Robertson, please visit our flower store.