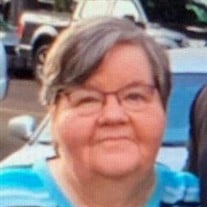 Nancy McClelland Barry, 75, a loving wife, mother and grandmother, went to heaven after a courageous battle with cancer, on June 6, 2020. The family will receive friends Tuesday, June 9, 2020 beginning at 1:00 pm until the 2:00 pm funeral service in the Chancellor Funeral Home Chapel. Interment will follow in Terry Cemetery. Nancy was born in Sturgis, MS on September 13, 1944 to James and Ruby Sanders McClelland. She was a longtime resident of Terry and a member of First Baptist Church in Terry. She retired after many years of service with Bellsouth, AT&T and Kroger. Crocheting was one of her hobbies, along with watching sports especially football. Her favorite teams were Ole Miss and the Atlanta Braves. Shopping was also an enjoyment, but spending time with her grandchildren whom she adored was her favorite. She is preceded in death by her parents, James and Ruby McClelland and her siblings, Rachel and Buddy. Those left to cherish her memory are husband of 56 years, James Barry of Terry; son Daniel Barry of Terry; daughter, Renee (Robbie) Myers of Terry; adopted daughter, Carrie Barrentine; 4 grandchildren, Hunter Myers, MacKenzie Myers, Nathan Barry and Micah Barry.
To order memorial trees or send flowers to the family in memory of Mrs. Nancy McClelland Barry, please visit our flower store.