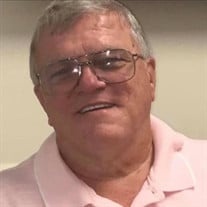 Michael Sim Alford, Sr. passed away on Thursday, December 16, 2021 at home in Terry, MS. He was 66. Visitation will be Saturday, December 18, 2021 at Chancellor Funeral Home in Byram, MS from 10:00 a.m. until the hour of the service at 12:00 p.m. Mr. Alford was born on February 26, 1955 to Arthur and Velma Davis Alford in Hinds County, MS. He retired from the United States Postal Service as manager of Building Maintenance. He was a member of Victory Baptist Church in Madison, MS. Michael is survived by his wife of 45 years, Vicki Berry Alford; son, Michael S. Alford, Jr.; three daughters, Amanda (William) Hall, Stacey (Garrett) Fairbanks and Chassity (Damon) Hogben; grandchildren, Will (Kayla) Hancock, Ethan Hancock, Natalie Alford, Edward Hall, Michael Hall, Tyler Fairbanks, Kylie Reed, Allie Reed, Gavin Hogben and London Hogben. Victory Baptist Church and the church family were such a blessing to him. Outside of his family, as a previous pastor and missionary, serving people and the church were the most important part of his life. He was always asking what he could do to make everyone else's life easier. Beloved by all who met him, no one remained a stranger for long. Most people knew that after you'd visited more than twice, you were no longer a guest, you were part of the family. Many people relied on him and yet his shoulders never sagged. He was the type of person one should aspire to be. The type of father every man would want to be. Faith and family were his primary motivations and have provided examples for all who met him. And what more could any man ever hope to achieve within their own lifetime, but to be a good steward of faith, a loving and loyal husband, and shining example to one's children and grandchildren? To raise, as an indivisible team; healthy, happy, and successful children, following in their parent's footsteps, that will pass those lessons learned from Mom and Dad to their children and all successive generations. This is the measure of a man! Rest easy in the arms of your Savior and know that the examples and lessons of your life will continue to serve those of us that will miss you in our daily lives but continue to know you and love you with our hearts, minds, and actions. The family requests memorials be sent to: Victory Baptist Church Missions P.O. Box 1955 Madison, MS 39130
To order memorial trees or send flowers to the family in memory of Mr. Michael Sim Alford Sr., please visit our flower store.