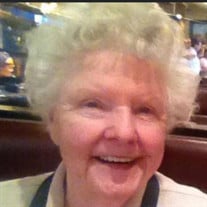 Mattie Ruth Chalk, 87, passed into the arms of Jesus on September 24, 2020 at NHC Healthcare in Anniston, Al. A graveside service will be held Monday, September 28, 2020 at 11:00 AM at Lakewood South Memorial Park in Jackson, MS. Mattie was born in Union, MS to the late Wilson Lewis and Mary Alicia Fauntleroy Sharp on September 10, 1933. She lived in Jackson many years, until she moved to Anniston AL 27 years ago. She worked as a Medical Secretary. She was a member of the former Bailey Ave Church of God and was currently a member of Harvest Church in Anniston, Alabama. She loved spending time with her family and grandchildren. Ms. Chalk was a very hard worker who also, loved to travel and see the world. She was also active in her church and she worked with her husband until he passed away. She was a unique person and left fond memories wherever she went. Those preceding her in death include her husband of 61 years William A. “Billy” Chalk, her parents Wilson Lewis and Mary Alicia Sharp; three sisters; Nellie Penton, Miriam Elmore, Lois Sharp and a brother; Donald Sharp. Those left to cherish her memory are her son Dr. David (Jackie) Chalk of Anniston, AL; sister Theda (Melvin) Howell of Brandon, MS; grandchildren Andrew D. Chalk of Louisville KY, Emily K Chalk of Charlotte, NC, Heather Brown of Argo, AL, and Tabitha Brown of Anniston, AL and 5 great grandchildren.
To order memorial trees or send flowers to the family in memory of Ms. Mattie Chalk, please visit our flower store.