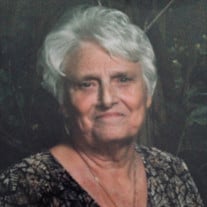 Marry Jane Wright went to be with the Lord on Wednesday, January 08, 2020 at Baptist Hospital in Jackson MS. Visitation will be at Springridge United Methodist Church on Sunday, January 12, 2020 at 1:00 p.m. until the hour of the service at 2:00 p.m. Mrs. Wright was born on August 10, 1937 in Evansville, Indiana to her parents Theodore Nelson and Esther Hein. She later moved to Florida where she lived with her husband, Charlie Wright, her daughter, Emilie Weaver, and her son, Jimmy Wright. She then lived in Brookhaven, MS until her husband, Charlie was transferred. The couple moved to Boykin, VA where they lived until he passed four years later in 1992. She eventually moved to Mississippi with her daughter and son where she lived until her passing. Mrs. Wright enjoyed keeping children at home for teachers. Lunch time was always a fun time and she loved watching Elmo and Barney with the kids. She enjoyed watching movies and interacting with them. Mrs. Wright also loved watching the birds in her bird feeder eat and take baths in the bird bath. She also loved spending time with her family and her beloved dog Trina. Thanksgiving and Christmas were her favorite times of the year because this was the only time that she got to eat the Honey Baked Ham that she only got once a year. She loved going on the road with her family and exploring the United States. She always went to visit her sister in Evansville, Indiana. She was a member of Springridge United Methodist Church for twenty years and loved going to church and praising the Lord, meeting people, and socializing with everyone at church. Along with her parents, she is preceded in death by her husband, Charlie and her grandson, Jansen Wright. She is survived by her sister Patricia (Don) Smith of Indiana; her daughter Emilie (Roy) Weaver of Terry; son Jimmy (Julie) Wright of Brookhaven; grandkids, Ryan, Tyler, and Carson Weaver of Terry and Jameson (Karly) Wright and Jenna (Zach) Dickerson of Brookhaven; and her great-grandkids, Nolan and Kyndal Wright of Brookhaven. Memorials may be made to Springridge United Methodist Church.
To order memorial trees or send flowers to the family in memory of Mrs. Mary Jane Wright, please visit our flower store.