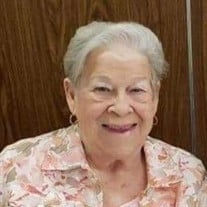 Mrs. Mary Lynn Taggart, 77, of Florence, MS passed away on Friday, January, 28, 2022 at St. Dominic Hospital in Jackson, MS. There will be a visitation on Friday, February 4, 2022 from Noon until 2:00 PM at Chancellor Funeral Home in Florence, MS. The funeral will be at Chancellor Funeral Home at 2:00 PM. Burial will follow at Natchez Trace Memorial Park in Madison, MS. Mrs. Taggart, a long-time resident of Madison, MS, moved to Florence in 2014. Known as an extremely hard worker, she courageously raised three children as a single mother. She was an active member of First Baptist Church, Florence where she volunteered every Tuesday at the food pantry. Her retirement date from Wynn-Dixie, where she served in the customer service department, was the same day that hurricane Katrina hit the gulf south. After retirement from Wynn-Dixie, she worked eight years at Jackson Data Products. Her determination and courage were demonstrated during her successful battle against colon cancer. Her friends and neighbors will remember her for her expressions of love by cooking them meals and baking them cookies and cakes. Her generosity led her to cook lunch every day for her neighbors who were not able to cook for themselves. Her children remark, that her kitchen looked like a catering business. Mrs. Taggart was preceded in death by her husband of nine years, Billy Ray Taggart; and, her parents, Daniel “Dan” McCain and Ivor Holcomb McCain. Those she leaves behind to cherish her memory include: her son, Tim (Kristie) Gardner of Florence; daughters, Kimberly “Shea” (Charley) Barry of Canton, NC, and, Angela Carol (Scott) Burkett of Marion AR; a brother Leon (Minnie Fay) of Monroe, LA; a sister Marie Taylor “Aunt GG" of Crossett, AR; ten grandchildren, Jena Leonard, Chris Kugler, Eric Turner, Lauren (Zach) Mason, Sydney Pyles, Jacob Gardner, Jake Pyles, McKenzie Pyles, Margaret Burkett, Jackson Burkett; and five great grandchildren, Lydia Turner, Owen Turner, Levi Mason, Rosi Kugler, Raik Kugler
To order memorial trees or send flowers to the family in memory of Mrs. Mary Lynn Taggart, please visit our flower store.