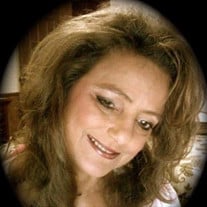 Martha Nell Davis Little, 55, passed away on Monday, December 16, 2019 at MS Baptist Medical Center. Visitation will be Thursday, December 19 at Chancellor Funeral Home in Byram from 5:00—8:00 p.m. and Friday, December 20 from 9:00 a.m until the service at 10:00 a.m. Interment will follow at Rosemont Gardens. Ms. Little was born on April 02, 1964 to Benjamin F. Davis and Margaret F. Williford. She grew up in Laurel where she attended Northeast Jones High School. She had lived in Florence for the last fifteen years and was a member of Hickory Ridge Baptist Church. She enjoyed being outside, fishing, and sitting by a fire. She also liked to crochet. She was a loving mother and her grandchildren meant the world to her, sister, and friend to many. Along with her parents, she was preceded in death by her loving son, Bradley Little. She is survived by her fiancé, Troy Bunn of Florence; son, Greg (Cassie) Little of Brandon; step-son, Jason (Christy) Bunn of Florence; step-daughter, Susie (Scott) May of Florence; sister, Betty (Dicky) Dickerson of Laurel; eleven grandchildren, Dylan, Lane, Lucas, Caden, Silas, Tessa, Courtney, Chandler, Jacob, and Valarie; and five great-grandchildren, Landry, Lennon, Lawson, Hayden, and Holden. In lieu of flowers, donations may be made to Operation Smile or Hickory Ridge Baptist Church. Online guestbook may be signed at chancellorfuneralhome.com.
To order memorial trees or send flowers to the family in memory of Ms. Martha Nell Davis Little , please visit our flower store.