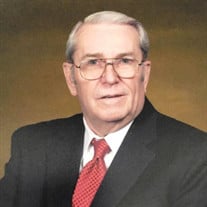 Larry Keith Simmons, of Brandon, MS, passed away Thursday, January 28, 2021 at Baptist Hospital after an extended illness, at the age of 80. Born in Jackson, MS, he attended Forrest County AHS. Following graduation, Larry joined the United States Air Force. After his honorable discharge, and a job in between, he moved with his wife, Betty Jean and family to Laurel, MS, where he ran his own business, Larry’s Truck Stop. He had a love for woodworking, stock car racing, and NASCAR. His next career was in trucking. He was an owner/operator for Ligon Trucking. His final career was in insurance with Liberty National, where he retired as district manager in Jackson. He was married to Betty Jean for 43 years. After her death, he married Jeannie Huffman, who was his high school sweetheart. After retirement, Larry was involved with the benevolence ministry at Crossgates Baptist Church and Mississippi Benevolence. He valued serving weekly in helping others and also enjoyed his Sunday School Class and Prime Timers. He treasured his friends and the sweet fellowship that they shared. One of his many hobbies was woodworking and he also was hard to beat in a game of dominoes. Along with is wife, Jeannie, he is survived by three daughters, Tracy (Jack) Moser of Ripley, Laurie Valentine of Ellisville, and Alisa (Steve) Stapleton of Pearl; two grandchildren, Keith (Miranda) Stapleton of Flowood and Stephanie Stapleton of Carrolton, GA; brother, Glenn (Tricia) Simmons of Richland; nephew, Lane (Brianne) Simmons of Smyrna, TN; brother-in-law, Grady Jolly of Jackson; and three step children, Tammy (Dale) Riddle, Chuck Milton, and Ron (Gena) Milton; and step-grandchildren all of Virginia. He was preceded in death by his parents, Robert and June Simmons and sister, Bettye Jolly. The family will receive friends for visitation on Saturday, January 30, 2021 from 10:00 – 11:00 a.m. at Chancellor Funeral Home in Florence. There will be a Graveside Service at 1:00 p.m. at Floral Hills Memory Gardens in Pearl. COVID-19 NOTICE: Due to guidelines regarding social distancing, 10 people will be allowed in the building at a time. In addition, face coverings should be brought and worn while inside the funeral home and during the graveside service. For the safety of the staff and the families we serve, please practice social distancing at all times.
To order memorial trees or send flowers to the family in memory of Mr. Larry Keith Simmons, please visit our flower store.