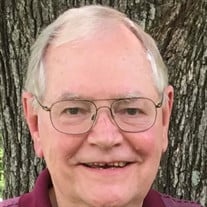 Larry Corley, 77 of Florence, went to be with his Lord, Tuesday, April 19, 2022 while at Select Specialty Hospital in Jackson. Visitation is scheduled for 6:00 until 8:00 P.M. on Thursday, April 21, 2022. There will also be a visitation on Friday, April 22, 2022 from 10:00 until the service at 11:00 A.M., all at Chancellor Funeral Home in Florence. A native of Hattiesburg, Mr. Corley had lived in Florence since 1975. He was gave his life to Christ while in a turnip patch on the family farm at the age of 12 and joined Indian Springs Baptist church. Once he moved to Florence, he became a member of Hickory Ridge Baptist since 1975 where he had served as a deacon, treasurer, and other positions. Larry was raised in a hard-working family of 8 children. He always had fond memories of his childhood and working on the farm and loved going back to that life to help his father as an adult. A veteran of the Mississippi Army National Guard, Larry joined Stuart C. Irby, Co. in 1975 after graduating from the University of Southern Mississippi. He was a computer analyst at Stuart C. Irby and was instrumental in purchasing their first computer at the start of the computer era. He was a loyal and dedicated employee for 42 years. During these years he made many close and life- long friendships. Larry married the love of his life, Fredna Chisholm Corley in 1968. They began a life together that saw many of life’s joyous and difficult moments and throughout it all their love prevailed. Larry loved his children, grandchildren and great-grandchildren dearly. He was not only a wonderful provider but he always showed unconditional love to his family. He was supportive and encouraging and made of point of being present in his children’s lives. Most importantly he modeled what it means to be a godly man with a servant’s heart. Larry was always ready and willing to help anyone in the church or community as well as his extended family. If there was a need he would make sure it was taken care of. Larry instilled in his children and grandchildren the importance of having a relationship with Jesus Christ. He fully believed in putting faith into action and modeled this consistently throughout his life. He loved southern gospel music and even to this day his children and grandchildren love “Pawpaw’s music”. Larry enjoyed gardening and working in his yard, especially in his retirement years. He loved playing with his grand and great grandchildren and was always involved in their activities. Larry valued the importance of family and it showed in the way he loved, supported and encouraged them. Larry always had a story to tell. These were the most interesting of stories and usually would have everyone laughing. He never met a stranger and everyone who met him made a friend for life. Mr. Corley is preceded in death by his parents, Earl and Annie Odom Corley; His siblings Clyde Corley, Robbie Taylor, George Corley, Bill Corley, and Lynn Corley. He is survived by his wife of 54 years Fredna Corley of Florence; his daughter Leigh (Stan) Georgen of Florence; son Stephen Corley of Florence; five grandchildren Andrew (Kaylina) Hill, Peyton Hill, Justin (Mollie) Corley, Will Georgen and Summer Georgen; five great grandchildren ​ Rivers, Bennett, Archer, Sadie and Ella; and sisters Barbara Tyner of Petal and Martha Purvis of Slidell, La. as well as numerous nieces and nephews. Memorials may be made to Gideons International. Online guest book is available at www.chancellorfuneralhome.com
To order memorial trees or send flowers to the family in memory of Mr Larry Corley, please visit our flower store.