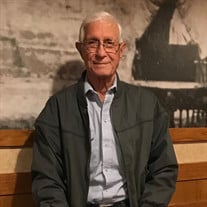 Kirby M. Wilson, Sr. (77), of Richland, MS passed away Sunday November 8, 2020 at his home. Mr. Wilson was a member of the First United Methodist Church of Richland. He was member of the Plain Masonic Lodge #622 and a Shriner. He was a Viet Nam veteran serving in the United States Army, and served as an Alderman for the City of Richland, 1985-1989. Mr. Wilson never met a stranger and had one of the best personalities and could always make you laugh. He enjoyed mowing his yard, hunting, and maintaining his prize-winning Corvette. He was a member of the Mississippi Corvette Club. Many of you will remember him for his ability to tap dance and his love of 50’s music. He was preceded in death by his parents Robert Lee Wilson and Lucille Overby Wilson. He is survived by his loving wife of 56 years, Janie W. Wilson of Richland, MS; his son Kirby M. Wilson, Jr. of Richland, MS. He is also survived by his brother Melvin Wilson and wife Doris of Burlington, IA, his nephews Douglas Wilson and wife Jane of Raymore, MO; and Curtis Wilson and wife Tina of Golden, CO and many family members and friends, who loved him dearly. A Memorial service will be held Monday, November 16, 2020 at 10:00AM at the First United Methodist Church in Richland, MS. Due to COVID-19 Mr. Wilson’s memorial will be held outside in the gazebo area. In lieu of flowers, memorials may be made to the First United Methodist Church, Building Fund, 250 Richland Circle, Richland, MS 39218.
To order memorial trees or send flowers to the family in memory of Mr. Kirby Michael Wilson Sr., please visit our flower store.