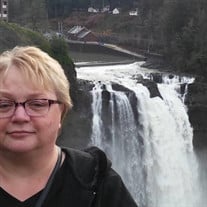 Kathy Jo McDaniel, 59, passed away on Tuesday, April 05, 2022 in Jackson, MS. A memorial visitation will be held First Baptist Church of Terry on Friday, April 22, 2022 at 6:00 p.m. with a Celebration of Life to follow at 7:00 p.m. A resident of Terry for the past three years, Kathy was born in Spencer, Iowa on October 20, 1962 to Larry McDaniel and Arlene Christian McDaniel. She grew up in Glendale, Arizona. Throughout her career, she was employed as a project manager for several insurance companies, including Wells Fargo. Kathy was compassionate and humorous, but quiet until she got to know you. She loved her animals. Along with her parents, she was preceded in death by her brother, John Reardon. She is survived by a son, Matthew McDaniel of CO; brother, Randy Reardon of Terry; and her aunt and uncle, Ray and Claudia Christian of Spencer, IA.
To order memorial trees or send flowers to the family in memory of Ms. Kathy Jo McDaniel, please visit our flower store.