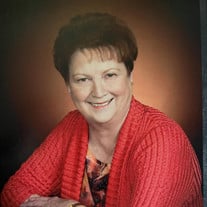 Ms. Judith "Judy" Cossette Brady McGrady went to be with her Lord and Savior on Tuesday, May 24, 2022, at Villa South Assisted Living in Florence. She was 74 years old. The family will receive friends for visitation on Saturday, June 11th from 10:00 a.m. until the 11:00 a.m. funeral service in the chapel of Chancellor Funeral Home in Florence. She will be laid to rest in the Garden of Memories following the service.

Judy was born in Natchez on June 13, 1947, and grew up in Brookhaven, Mississippi. She attended the University of Southern Mississippi before moving to Lexington, Virginia, where she met and married her husband. She spent the next 20 years being a loving military wife. Much of that time was devoted to being an avid supporter of her husband and the United States Air Force’s men, women, and families he led. As she moved her family around the country, she helped them to assimilate with ease. Her world

beyond the Air Force was her children and extended family. She was forever the party planner and reunion organizer. The military lifestyle instilled in her a love of travel. She visited numerous places around the globe with friends and family and enjoyed the various cultures she encountered. When not traveling, Judy could be found at her grandchildren’s various events: church, sports, drama, choir, and art to name a few. In her retirement years, she looked forward to Friday nights and spent her Friday afternoons feeding the Florence High School football team. She loved nothing more than cheering on the Eagles! For whatever her children and grandchildren’s passions were became hers.

Judy was preceded in death by her father, Dalton Burrows Brady of Brookhaven; and her mother, Marguerite Lindsley Brady of Brookhaven. She is survived by her son, Michael (Kevin) McGrady and daughter-in-law, Jackie McGrady; her daughter, Kelley Lingold and son-in-law Bobby Lingold; and a host of grandchildren, Chris Malone, Mattie McGrady,

To order memorial trees or send flowers to the family in memory of Ms. Judy Brady McGrady, please visit our flower store.