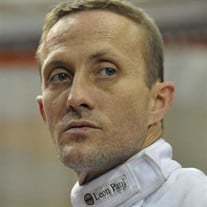 Joseph “Joey” Brinson, 43, passed into the arms of Jesus on Friday, October 4, 2019 at MS Baptist Medical Center in Jackson, MS. The family will receive friends for Visitation on Sunday, October 6th from 2:00 – 5:00 p.m. and again Monday, October 7th from 10:00 a.m. until the 11:00 a.m. Funeral Service all at Chancellor Funeral Home in Florence. Joey was born August 22, 1976 in Florence, MS where he lived all of his life. He was a 1994 graduate of Florence High School where he played football. That same year, at the age of 17, he was involved in an auto accident leaving him paralyzed. He stayed active after his accident, playing sled hockey and snow skiing in Colorado followed by wheelchair Fencing. He traveled the world competing in two Paralympic Games in London and Rio. He even visited the White House following the London Games. In his own words, “I wouldn’t change anything, look what all I’ve been able to see and do”. Joey never met a stranger and he loved to fish and shoot guns. Joey is preceded in death by his father, Joseph C. Brinson; grandfathers, Pleaz Tucker and Joseph A. Brinson; and his grandmother, Betty Therrell Brinson; He is survived by his mother and step-father, Betty and James Clanton of Brandon; sister, Rebecca Brinson of Dade City, FL; nephew, Vintrell “Trell” Gailliard; step siblings, Daniel (Miles) Clanton of Grenada and Shandi Butler of Brandon; grandmother, Louise Tucker of Florence; step grandmother, Lo Eva Clanton of Grenada; a number of Aunts, Uncles and a host of friends, worldwide.
To order memorial trees or send flowers to the family in memory of Mr. Joseph "Joey" Glen Brinson, please visit our flower store.