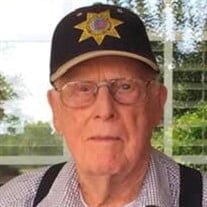 Mr. John T. “Johnny” Wilkes, 99, passed away Friday, January 10, 2020 at Mississippi State Veterans Home in Jackson, MS surrounded by his family. Visitation will be Monday, January 13, 2020 at Chancellor Funeral Home in Byram from 5:00—8:00 pm and Tuesday, January 14, 2020 from 10:00 until the service at 11:00 am. in the funeral home chapel. Interment will follow at Terry Cemetery in Terry, MS. A long-time resident of Terry, MS, Mr. Wilkes was born to John Williams Wilkes and Myrtle Mulanax Wilkes in Apache, OK on December 19, 1920. Mr. “Johnny” Wilkes was born and spent most of his childhood in Oklahoma before joining the United States Army and serving two years in Northern France and Rhineland, Germany during World War II as a small arms repairman and auto mechanic. After the war, Mr. Wilkes returned to the states and spent two years in California before he settled down with his wife, Oneda Langston Wilkes in Terry, MS as a cattle farmer. He will always be remembered for his witty sense of humor and playful personality. He was a Godly man who had a divine love for his Lord, wife, daughter, and grandchildren. Those that knew him always enjoyed the simple conversations with Mr. Johnny. He was a joy to be around and was a person you wanted to absorb everything he had to say. Along with his parents, Mr. Wilkes is preceded in death by his wife of 72 years, Oneda Langston Wilkes, his sister, Oveda Tidwell; his grandson’s wife, Dr. Nikki Shoemake-Patterson; and great-granddaughter, Aubrey Caroline Patterson. He is survived by his daughter, Linda Kay Wilkes Patterson of Terry, MS; two grandchildren, Jason Patterson of Starkville, MS and Renee P. Lewis (Justin) of Cummings, Ga; six great-grandchildren; two great-great-grandchildren, numerous nieces, nephews, including one very close nephew, Ronnie Peoples, and many other relatives and friends.
To order memorial trees or send flowers to the family in memory of Mr. John T. "Johnny" Wilkes, please visit our flower store.