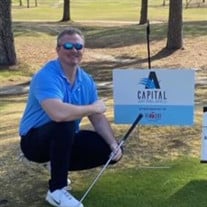 John Bradley Todd, 34, passed away on Monday, June 21, 2021. A celebration of life will be held at 10:00 a.m. on Tuesday, June 29, 2021 at Chancellor Funeral Home in Byram, MS. A life-long resident of Terry, MS, Brad was born on June 15, 1987 to John Davis Todd and Marcia Casey Todd. A 2006 graduate of Terry High School, he was employed as a civil engineer at Capitol Air Balance, where he worked alongside his father. In his spare time, he enjoyed fishing and hunting. Brad was a very gentle, loving person who was kind to all. Brad is survived by his father and step-mother, John and Jeannie Todd; mother, Marcia Todd; sister, Bridget (Justin) Mizner of Brandon; step-brother, Shane (Kia) Todd of Maryland; step-sister, Alicia (Marty) Lawrence of Canton; two nieces and one nephew; and a host of friends.
To order memorial trees or send flowers to the family in memory of Mr. John Bradley Todd, please visit our flower store.