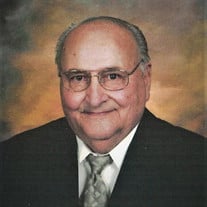 John J. “Jack” Freeman, passed into the arms of Jesus on Tuesday, February 8, 2022 at Brandon Court Nursing and Rehab in Brandon, MS. He was 89 years old, just one day shy of his 90th birthday. The family will receive friends for visitation on Friday, February 11th from 5:00 – 7:00 p.m. at Chancellor Funeral Home in Florence. The funeral service will be Saturday, February 12th at 2:00 p.m. at Star Baptist Church. He will be laid to rest next to his wife, Rachel, at Star Cemetery following the service. Jack was born February 9, 1932 to the late John Harvey and Edith Freeman in Independence, IA where he was raised. He has lived in the Rankin County area for the last 50 years, where he attended Star Baptist Church. He served his country during the Korean War in the USAF. He enjoyed flying and even had his own plane. He worked in sales with Walker Jones Construction, where he eventually retired. He was a very successful entrepreneur, owning and operating several businesses. He maintained his Real Estate License and enjoyed buying and selling property. He was an active member of the Lions Club in Florence where he had many friends. Along with his parents, Jack was also preceded in death by his wife, Rachel Bynum Freeman; sister, Edith Ann Freeman; brothers, Hubert F. Freeman and Lynn Freeman; niece, Teresa B. (Willis) Poling; and brother-in-law, Wayne Bynum. He is survived by his brother-in-law, Gus Bynum of Star; sister-in-law, Jayne Bynum of Star; nieces, Martha (Bobby) Murphy of Florence, Michelle (Daniel) Bartrum of TN, and Kim (Thomas) McInnis of Star; nephews, David (Barbara) Bynum of Star and Steve (Michelle) Bynum of Florence; grandnieces and grandnephews, Hayley Bynum, Lindsey Bynum, Vanessa Savona, Elizabeth Smith, Chris Bynum, Amanda Bynum Flynn, Ben Bynum, Lilly McInnis, and Bruce McInnis; and cousin, Harold (Marilyn) Freeman of Independence, IA.
To order memorial trees or send flowers to the family in memory of Mr. John "Jack" Freeman, please visit our flower store.