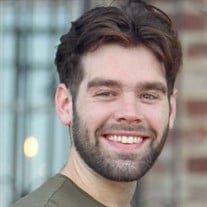 John Benjamin “Ben” Frederick, 22, passed away Monday, September 2, 2019, at his home. Visitation will be Thursday, September 5, 2019, from 5-8pm at Chancellor Funeral Home in Byram and again on Friday, September 6, 10am until the 11am funeral service. Interment will follow at Garden of Memories in Florence, MS. Ben was a Veteran of the U.S. Marine Corps., a Nurse Technician at UMMC, and an MC student working toward becoming a doctor. He loved helping people who couldn’t help themselves and enjoyed singing and science. Ben loved to make people laugh and was known as a protector and good listener. Family was Ben’s priority, and he was so excited about becoming a dad. He is preceded in death by his maternal grandfather, William E. Ward; paternal grandfather, Jerry Frederick, and cousin John David Frederick. Survivors include his parents, Steve Frederick, Sr. and Beverly Frederick both of Byram; his loving wife, Rebecca Frederick of Jackson and unborn son, Graham Frederick; brother, Steven (Allison) Frederick, Jr. of Byram; sisters, Anna (Evan) Bigby of Brandon and Abigail Frederick of Byram; paternal grandmother, Dorothy Frederick of Paragould, AR, and maternal grandmother, Betty Ward of Byram; niece, Audrey Grace Bigby of Brandon and multiple aunts, uncles, and cousins.
To order memorial trees or send flowers to the family in memory of Mr. John Benjamin "Ben" Frederick, please visit our flower store.