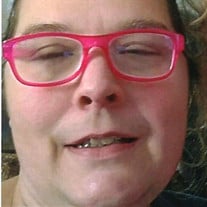 Jenny Leigh Watson Emerson, 54, went to be with the Lord from her home on Thursday, November 28, 2019. Visitation will be 5-8pm Monday, December 2, 2019 at Chancellor Funeral Home in Byram and again on Tuesday, December 3, 10am until the 11am funeral service. Interment will follow at Terry Cemetery. Jenny was a 1983 graduate of Terry High School. She moved to Utica from Flora a year ago, attended Oakview Baptist Church in Terry and was a retired bus driver for Hinds County Schools. Jenny enjoyed helping out at the Food Pantry in Crystal Springs and helping anyone in need. She loved to plant flowers, work in the yard and most of all Jenny loved the Lord, her family, and especially her grandchildren. Those left to cherish her memory are her parents, Cecil and JoAnn Watson of Terry; her loving husband of 29 years, Jeffrey Emerson; children, Chris Watson of Terry, Jessica Holmes (Adam) of Terry and Paul Emerson (Brittany) of Richland; brother, Joseph “Joey” Watson (Missy) of Terry; grandchildren, Ryan, Connor, Claire and Astrid.
To order memorial trees or send flowers to the family in memory of Mrs. Jenny Leigh Emerson, please visit our flower store.